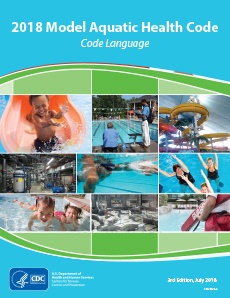 The Model Aquatic Health Code (MAHC) is hosted by the Centers of Disease Control and Prevention (CDC).  The enormity of work and effort that has gone into creating this national uniform aquatic health code is staggering.

The CDC is the only U.S. federal agency that has commission over public aquatic facilities and since their mission is “to promote health and quality of life by preventing and controlling disease, injury and disability,” they are the best-qualified organization to create such a document.  The CDC is not a regulatory agency and will not require adoption or impose it.  Ho

wever, once the MAHC is completed, it will be the federal “Standard of Care” for public aquatic facilities.  It is intended to be a model aquatic code standard that state and local public health agencies can adopt in part or in whole as code regulations for their jurisdictions.

While the CDC is the driving force behind the creation of the MAHC, they are not doing it alone.  The creation process is patterned after the U.S. Food and Drug Administration’s “Food Code,” which has been published every two or four years since its inaugural edition in 1993, and has revolutionized the regulation of the restaurant and grocery industries.  (As of 2005, the Association of Food and Drug Officials reported that 48 states had adopted food codes based on some iteration of the FDA’s national model.)1

The MAHC is scientifically-based on data gathered by the CDC from experts in the aquatic industry.  These experts have volunteered to be members and leaders of the MAHC and to chair the twelve topical committees doing the research and developing the code.  “As with the Food Code, this is not just creating code language – it’s not just a matter of what does the code say, but why,” says Doug Sacket, New York State Department of Health and Director of the MAHC’s steering committee.  “We’re adamant that the code has to be supported by scientific data, to the extent possible.  In pool codes across the country, even in some of our industry standards, there are criteria we’ve been using for decades.  But when you start drilling down the information and asking where this information came from, there’s often no defense for it.  It’s just, ‘This is how we’ve always done business.’ ”1

Once each committee completes its research, develops and writes its specific topical section, or “module” of the MAHC, the module and its corresponding “annex” (the scientific rational behind the module) is released to the public for a 60 day comment period.  After 60 days, the module is edited, the public comments are addressed and then the module is republished.  After all twelve of the modules go through this process, the entire MAHC will then be released for one more 60 day comment period.  We expect the first edition of the MAHC to be published by the summer of 2013.