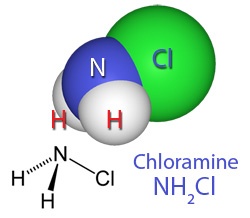 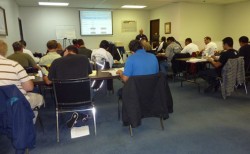 A full House in Anaheim

Chloramines – what are they?

We returned to PoolCorp’s Anaheim facility, October 7-8, 2010 to teach a very large class of eager students.  In this CPO class (as well as in all our classes)  we talked about chloramines; what they are, how to prevent them, how to try to rid them from the pool, and what to do if they persist.

Chloramines are result of one thing:  not enough residual chlorine in the pool to handle the contaminates introduced into the pool due to the bather load or other sources.   “Chloramines are the result of chlorine in the water combining with various nitrogen compounds, which can be organic, brought in by swimmers, fertilizer, rain, run off, cleaners, leaves, ducks, cats, dogs, insects, rodents and birds just to name a few”. (Pool Chlorination Facts – IPSSA Continuing Education Series, p117, Robert W. Lowry, 2003).

They are foul smelling and very unhealthy.  Chloramines can be controlled and prevented, but only if there is enough chlorine in the water to oxidize the contaminates before the chloramines are formed.

A good Certified Pool Operator knows his pool.  He keeps records.  He knows and anticipates the bather load.  He knows and understands ‘breakpoint chlorination” and knows how to keep enough chlorine in the pool to prevent the occurrence of those nasty, smelly and unhealthy chloramines.  He  knows how to run his pool at “breakpoint”. 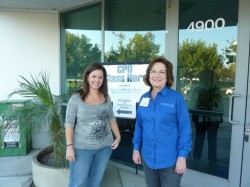 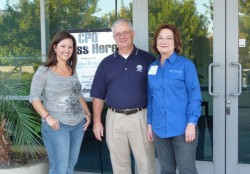 We just cannot say enough good things about our host at our home base:  Superior Pool Products, Anaheim!  Thanks to everyone for being so friendly and helpful!!

This time, we got to visit a little with Gretchen Peterson.  She is PoolCorp’s Assistant Division Credit Manager for the Pacific Division, covering territory from the State of Washington down to Los Angeles.   Wow–that’s a lot of customers to keep up with!–but Gretchen takes it all in stride.  It’s always nice to talk with someone that loves their job and the company they work for, and Gretchen is yet another one of the many devoted and loyal PoolCorp employees we have met through our CPO classes.  Keep up the good work, Gretchen!