We had a lot going on the past few weeks.  We held a CPO class in San Diego on July 8 – 9 (Thursday – Friday).  Then on Saturday, July 10, Steve traveled to Omaha Nebraska to attend his niece’s wedding. — He had a great time, seeing and visiting with his family and meeting the family of the groom — great people from Wisconsin.

The class in San Diego was a success — the room was full and we had great discussion and feedback.   One topic of interest was heaters and British Thermal Units – BTUs.  How long does it take to heat up the spa?   Well, you need to know a few things:  1) The rating of the heater in BTUs,  2) The efficiency of the heater,  3) How much water is in the spa and  4) The temperature rise.

A BTU is the unit of measure of energy that it takes to heat up one pound of water one degree Fahrenheit.  The heater efficiency is the percentage of heat that is actually transferred to the water.   The temperature rise is the difference between the starting temperature and ending temperature.

Pictured with Steve in San Diego is David Vandesande (or “David V” as he is called, since there are at least 2 or 3 “Davids” at the San Diego SCP office!).  David is the Southern California Telesales Representative for PoolCorp.  His office is just down the hall from the classroom in San Diego.  His job is receiving calls, taking orders and talking to customers.  While visiting with him, he indicated that more and more pool guys are inquiring about the CPO class — so the buzzz is happening! — one of the students in the July 8-9 class was one of his referrals — so thanks, David! 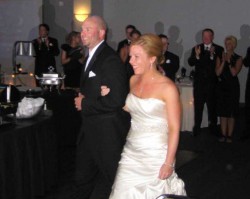 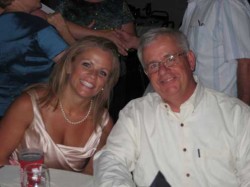 Steve and his daughter, Barbie

The wedding was great – I had a good time.   Here’s a pic of the bride and groom at the reception (left).  And another picture (right) of my daughter Barbie and I having a good time.   Barbie’s oldest son, Coby (11) accompanied me back from Nebraska to California.  He stayed with us a week, and we had a lot of fun ..  Here he is on the Balboa pier in Newport Beach. We put him on an airplane for home this past Tuesday, then on Wednesday Elise and I headed to Riverside for another CPO class.

I have said this before, and will say it again — only because it happens over and over  —  Its the veteran pool guys that seem to get the most out of the CPO material.  The whole CPO presentation covers the very foundation of swimming pool operation and maintenance.  The veteran guys in the Riverside class this past Thursday and Friday stated several times that it was well worth their time and that they got a lot out of it. 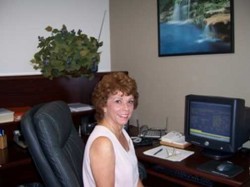 The whole class benefits from their comments, feedback and participation. Thanks guys, and thanks again PoolCorp for hosting us!

Here’s  Billie Boche, PoolCorp’s Western Regional Credit Manager in her Riverside office.  She manages 1500 accounts in Southern California and has been in the credit business for over 35 years.  Billie is a very nice lady, but she is also very serious about her job and the company’s bottom line!  If you don’t pay your PoolCorp account on time, she just might be calling on YOU next…… So — pool guys, PAY UP!