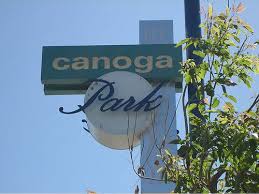 We held our CPO class in Canoga Park for the first time at Pool Corp’s SUPERIOR Pool Supply distribution center this past Friday and Saturday, October 9-10, 2009. 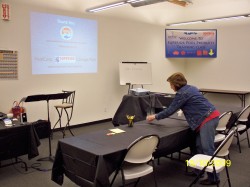 Elise getting everything set up in Canoga Park.

What a GREAT venue!  Canoga Park’s Branch Manager, Dave Huber, and his crew provided us with the entire second floor of their building!…..0pen space, plenty of tables and chairs, and a separate area for our hospitality layout.  Thanks a lot guys.  We hope you will have us back!

Our students were as diverse as ever:  independent pool guys, builders, a pool operator from a nearby major water park, and an aquatics facility manager from the City of Malibu — all participated, gave good feedback and did well.  We had a good time.

A special thanks to Robert Sanders and Operations Manager, Tom Green, for opening up early and staying after closing to accommodate us. 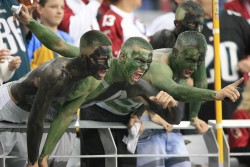 After class ended on Saturday,  we had the privilege to spend some time chatting with Tom for a while.  We asked for his picture, but discovered he is extremely camera shy.  We also learned that he is a die-hard Philadelphia Eagle’s fan.  So we did a bit of research — and may have found his picture anyway …….